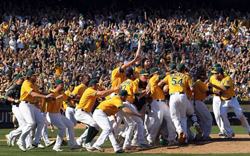 In Major League Baseball, a portion of revenue generated during the postseason is divided among the division winners and wild card teams that compete in postseason play. As teams move on to successive rounds, from divisional series to leagues series and eventually the World Series, these shares become greater. The Oakland Athletics showed an unprecedented act of selflessness and kindness by voting to donate the equivalent of one playoff share for disbursement among charitable organizations with ties to the Bay Area. Current Boston Red Sox, and previous Athletic Jonny Gomes was credited with raising the idea, which was met with unanimous support in a team-wide meeting. Pitcher Jerry Blevins, charged with identifying worthy recipients, said that he was "honored to represent such a thoughtful and community minded group of players. I identified the meaningful organizations in our own back yard, along with some from the baseball family. The connection to Craig and the important work of the Strike 3 Foundation working toward eradicating pediatric cancer made the decision quite easy."

The Strike 3 Foundation is privileged and humbled to accept such a unique act of philanthropy. A check for $5,000 representing the Oakland Athletics contribution was received in February.