Home » about » all stars among us » david rosen 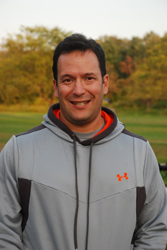 My name is David Rosen and I live in Newtown, Connecticut with my wife and three children. Since 2003, I have worked in the pharmaceutical industry.

I first was introduced to the Strike 3 Foundation in 2010 when my wife and I attended the Strike 3 Foundation's First Pitch Gala in Stamford, CT. While enjoying the entertainment and auction immensely, I was struck by the courageous stories told both by children, as well as surviving family members, about their fights with pediatric cancer. My wife and I also attended the 2011 First Pitch Gala and we were accompanied by our two children. As I watched them starry-eyed while enjoying the entertainment and meeting baseball players and other professional athletes, I was struck with an idea to help the foundation!

Prior to the Gala, I had already planned to run a 50 mile ultra-marathon in September 2012. I realized that I could combine three of my favorite passions in life - children, baseball, and running - into a single goal.

Inspired by Craig Breslow's dedication to helping children and families affected by pediatric cancer, I decided to dedicate my fundraising efforts for my 2012 ultra-marathon to the Strike 3 Foundation.