Home » about » all stars among us » congregation mishkan tefila 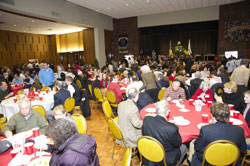 On January 22, 2014, The Brotherhood of Congregation Mishkan Tefila in Chestnut Hill, Massachusetts honored Red Sox pitcher and Strike 3 Foundation founder Craig Breslow with its Distinguished Service Award. The event also honored the 2013 Massachusetts Little League Champions from Newton. In appreciation for its work in the community, and its efforts to raise funding and awareness for pediatric cancer research and treatment, Strike 3 Foundation was presented with a donation of $10,000. An additional donation was made through the proceeds of a live and silent auction, in which a Breslow jersey and Red Sox experience sold for over $2,000.

The Strike 3 Foundation appreciates the generosity of the Brotherhood of Congregation Mishkan Tefila, and the work of event chair Chuck Diamond and his staff.