Highlights: Began season in Phillies organization and made first appearance with Philadelphia April 23 after opening season with Triple-A Lehigh Valley...Had seven game scoreless streak (6.2 IP) from May 17 - June 3...Set career-high with fi ve strikeouts June 16 vs. Toronto...Released by Phillies Aug. 6 and signed minor league contract with Angels Aug. 12...Made Angels debut Sept. 2 at Seattle and worked one scoreless inning...Did not allow a hit in first five games (5 IP) for Angels...Assumed role as Angels closer and recorded first save on Sept. 4, marking first Major League save since June 15, 2013 for Boston...Did not allow a run in 11 of 12 appearances with Angels...Six saves in month of Sept. were most for any Angels pitcher in any month for the season.

Highlights: Signed a minor league deal with the New York Yankees. Suffered numerous setbacks in his recovery from his shoulder injury and spent the season rehabbing in Tampa.

Highlights: Began the 2013 season as a middle reliever with the Red Sox, but assumed the closer role in mid-April. Compiled 8 saves, a 3-1 record and a 3.77 ERA in 30 appearances before suffering a shoulder injury that kept him from playing for the rest of the season. After the All-Star Break, MRIs confirmed there was a torn capsule and damaged labrum in his throwing shoulder. Underwent shoulder surgery on July 24, ending his 2013 season. 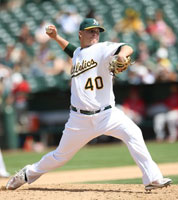 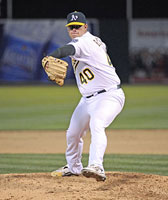 Highlights: Made the jump from Double-A to the majors in 2009 and was named American League Rookie of the Year by the BBWAA...became the eighth Athletic to win Rookie of the Year honors, the third in the last six years (Bobby Crosby, 2004 and Huston Street, 2005)...was also named as the closer on Baseball Digest's Major League All-Star Rookie Team...assumed the A's closer duties by the end of May and set an Oakland rookie record with 26 saves, breaking the previous mark of 23 set by Street in 2005...it tied for the sixth highest save total by a rookie in AL history...led all Major League rookies in saves (no one else had more than nine) and ranked ninth among all AL relievers...had just four blown saves for a save percentage of 86.7%, which also ranked ninth in the AL...his last blown save came June 16 at Los Angeles (NL) and he converted each of his final 21 saves opportunities...that tied for the second longest save streak in the AL and tied for third longest in the majors...it was the longest ever by an Oakland rookie and is tied for second longest in Oakland history...was named to the AL All-Star team, the only rookie named to either team...led AL relievers and ranked second in the majors with a .167 opponents batting average (Broxton, LAD .165)...it was the fifth lowest mark by a reliever in Oakland history...ranked second among AL relievers and eighth among all AL rookies with 91 strikeouts... that was the 10th best total by a reliever in Oakland history...ranked third among AL relievers with a 1.84 ERA...since the earned run became an official stat in 1913, that was the fourth lowest ERA by any Athletics pitcher with 80 or more innings...also ranked second among AL relievers in opponents on-base percentage (.228), third in innings pitched (83.1) and opponents slugging (.248), tied for fifth in wild pitches (6) and tied for eighth in wins (6)...appeared in 68 games, which ranked third among AL rookies and was the second highest total in Oakland history (71, Aaron Small in 1997)...his .167 opponents batting average included a .146 (20 for 137) mark against left-handed hitters and .185 (29 for 157) against right-handers...the mark against lefties was the lowest in the AL (min. 125 batters faced)... allowed four of his five home runs to lefties, but his .248 slugging percentage was also the lowest in the AL...yielded a .152 average with runners in scoring position and opponents were 3 for 37 (.081) with RISP and two outs...first batters faced hit .125 (8 for 64) with four walks...the batting average was fifth lowest in the AL but was fourth lowest by an A's reliever since 1974...allowed just one run and converted 11 of 12 save opportunities in 17 outings on no days rest (19.1 ip, 0.47 ERA)...had a 2.25 ERA in his other 51 appearances...allowed 8 of 23 (34.8%) inherited runners to score...walked just eight and struck out 53 in 39.0 innings in Oakland and issued 16 walks while striking out 38 in 44.1 innings on the road...had a 0.98 ERA in 23 day games and a 2.26 ERA in 45 night games...compiled a 0.90 ERA in eight interleague appearances but had two of his four blown saves...tossed at least 1.0 innings in 67 of his 68 outings, including a season-high 2.0 innings 11 times...struck out at least two batters 31 times.